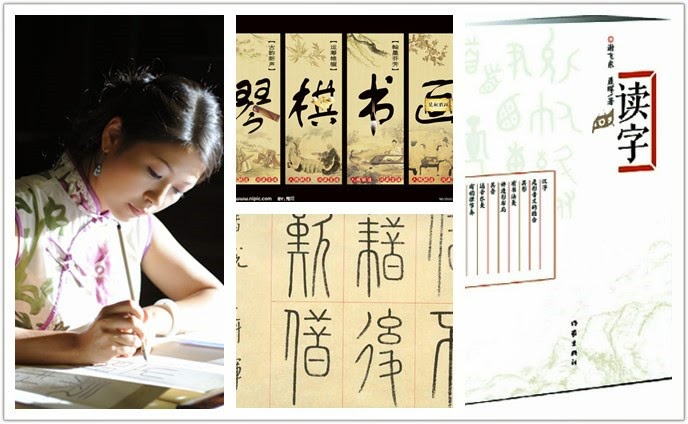 Introduction of the Speaker:
Nie Hui: Female, academician of Chinese Calligraphers Association and China’s Academy of Poetry, standing director of Asian Cultural Exchange Society and the secretary general of Art Committee of painting and calligraphy. She was once awarded as the “Top Ten Talented Women” in Chongqing and “The Second Celebrity of Youth Culture”, and invited to perform calligraphy and Guqin solo at Shanghai World Expo. She has won many prizes for her excellent paintings and calligraphy works, and her representative tracks include Flowing Water and Green Ravine and Flowing Spring. In 2012 and 2013, she was invited to hold personal exhibition of calligraphy and paintings and Guqin appreciation programme in Malaysia and Macao.

Costs:
The whole event is without charge 免费

We wish you all the best and are looking forward to welcome you at the ‘Discover the Beauty of Chinese Characters’ Culture Workshop!

A bite of Chongqing--Spring Rolls 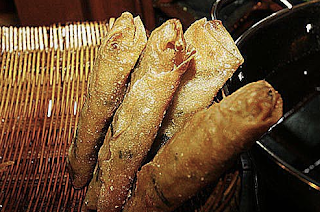 In Chinese cuisine, spring rolls, or Chunjuan , are pastries filled mostly with
julienned vegetables(such as cabbages, carrots, agaric and so on). Some
include strips of meat, usually beef and chicken; others have seafood. The
filling is wrapped in a thin, flour wrapper, and usually deep fried. Chongqing
spring rolls are crispy.
First Published by cqnews

A bite of Chongqing--the hot pot 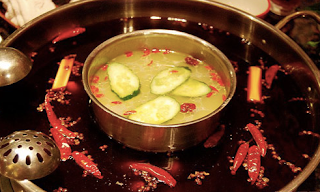 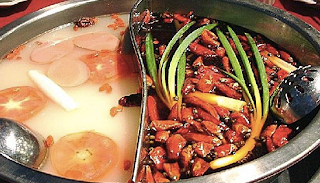 Hotpot is the most famous and favorite dish in Chongqing. Chongqing local
people consider the hot pot a local specialty, which is noted for its peppery
and spicy, scalding yet fresh and tender. People gather around a small pot
boiled with charcoal, electric or gas filled with flavorful and nutritious soup
base. You have a choice of spicy, pure and combo for the soup base. Thin
sliced raw meat, fish, various bean curd products and all kinds of vegetables
are boiled in the soup base. You then dip them in a little bowl of special
sauce. Be carefulwhenthe spicy soup base is burning hot.
Hotpot first eaten by poor boatmen of the Yangtze River, and then spread
westwards to the rest of Sichuan. Now is a very popular local flavor and can
be found of every corner of the city. There are a great variety of hotpots,
including Yuanyang Hotpot, Four Tastes Hotpot, Yaoshan Hotpot and
Fish Head Hotpot. If you are adventurous enough, you can basically cook
anything with hot pot, e.g., pig's brain and duck's kidney.
Chongqing people love their hotpot, especially when the weather is steamy.
The fire dances under the pot, the heavily oiled and spiced soup boils with
hazy steam, and the people are bathed in sweat. Although hotpot can be found
wherever there are street vendors or small restaurants, Chongqing hotpot has
the greatest variety and is known for its delicious soup base and dipping sauce.

Culture of Chingqing as a Temporary Capital

With the outbreak of the Anti-Japanese War (1937-1945), on October, 1938,
the Japanese army occupied Guangzhou and Wuhan. Then, the government
of the Kuomintang (KMT) party withdrew to Chongqing from Nanjing, and
made Chongqing the temporary wartime capital. As a result, Chongqing
became the political, military, economic, and diplomatic center of China
at that time.
Chongqing, together with Washington in America, London in England, and
Moscow of the former Soviet Union, are recognized as the four famous historical
cities of the Allies in World War II. In addition, Chongqing played a significant
political role in the construction of the united line between the KMT and CPC.
During the 7 years of the Anti-Japanese War, many historic people, events, and
places were pushed onto the historical stage of China, reserving many peculiar
human cultural scenes for Chongqing.
As the temporary capital during the Anti-Japanese War, many historical places
were built in Chongqing and over 400 relics have survived, according to
incomplete statistics. However, due to the fast rate of construction in Chongqing,
many relics have been lost. Presently, the representative relics include the former
residences of such important persons as Chiang Kai-shek and Soong May-ling,
as well as the memorial museum for the second cooperative agreement between
the KMT and CPC, which held such documents as the Chongqing Negotiation
and the Double Ten Agreement.
The Huangshan Official Residence for Chiang Kai-shek on the South Mountain
in Chongqing has been better preserved for its incomparable integrity. During
the peace negotiation between KMT and CPC, Mao Zedong, the leader of
the CPC, accompanied by Zhou Enlai and Wang Ruofei, the representatives
of the CPC, flew to Chongqing and negotiated with the KMT in Hongyancun and
Guiyuan, etc. Guiyuan, originally the residence of General Zhang Zhizhong (KMT),
was prepared for Mao Zedong’s stay in Chongqing. On October 10, 1945, the Talk
Summary for the peace negotiation between KMT and CPC was signed exactly
at the living room of Guiyuan.
As the temporary capital during the Anti-Japanese War period, many industries
and schools were marshaled in Chongqing. Many famous enterprises today in Chongqing

developed from wartime initiatives. At the same time, many young,
patriotic students flooded into Chongqing to fight against the invasion of Japan.
Many cultural celebrities like Guo Moruo, Liu Yazi, Ma Yinchu, Tao Xingzhi,
Liang Shuming, Xu Beihong, and Lao She settled and worked in Chongqing.
Therefore, the culture in the temporary capital Chongqing was flourishing and
Chongqing became the cultural and educational center for the Sichuan province.
The cultural district Shapingba, gathering a lot of schools and universities,
became the famous “cultural dam” at the southwest and northwest area
during that time. The former building of the state-run Central University is
still standing on the campus of Chongqing University today.
First Published by cqnews